Swarf Mats in the workshop and PVC anti slip mats

If your workplace has lots of swarf and no swarf mats,  you will relate to the problems that this involves. And any workshop that is involved with removing material as part of their work process will encounter filings, shavings, turnings, chips and so on, better known as swarf.

Recently one of our customers who is involved in the manufacturing of benchtops asked us to supply specialist swarf mats, as they were having a real problem with anti-slip in their workshop.

Having had many previous swarf mats fail to perform in the environment, the plant manager asked Amco to look into a particular area. We had a good look and came away with some key and informative points.

As noted from the above points, previous mats had failed in the area, being either torn by the trolley or swelling and warping due to the oil.

Our Strong Grip swarf mat is highly flexible, as seen from the photo. Made of tough PVC.

Heavy duty Nitrile mats that had been trialled clogged with swarf, were impossible to move for cleaning due to the weight and ended up being pressure washed in situ. This hardly moved the swarf embedded in the drainage holes and as a result these mats were eventually put into the resident skip bin.

After a thorough look, Amco came up with a PVC mat that was lightweight enough to move for cleaning and elevated off the floor with solid ribs. The height of the working surface meant swarf could fall through to the concrete floor without getting caught in the mat. We call the mat: Strong Grip, which is what it does.

The final key and most important product spec was the anti-slip pattern. The typical criss-cross or square anti-slip pattern of previous mats caused the trolley wheels to shudder, which caused the cutting of the mat. The one-way run of anti-slip of the new PVC mat meant the trolley rolled across it smoothly with no bumps at all, and a solid PVC bevel at each end meant rolling it on and off was a breeze. 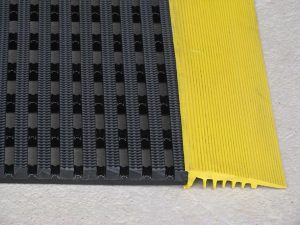 And, we’re happy to say that the customer is extremely happy with their new anti slip mats. See more info on this mat