In the late 1990s, a laboratory study was conducted by Center for Sensory-Motor Interaction (SMI) at Aalborg University of Denmark. The study focused on the physiological and biomechanical responses to prolonged light repetitive manual work standing on hard (aluminium casting) surfaces compared to soft ones. The later being a polyurethane standart mat).

The subjects tested stood on the hard and soft surfaces for a period of two hours. 10 subjects were involved in the hard surface and 11 in the soft one.

Standing on the hard surface compared to the soft one, the results  showed an increased swelling of the shank, an increased EMG (electromyograph) activity (right soleus muscle ) of the lower leg and a greater amplitude and total angular displacement. As well, there was a larger CoP (centre of pressure) displacement in the frontal plane. There were also more pronounced muscle fatigue that was noted.

The test also involved experimental muscle pain. This was elicited by injecting hypertonic saline solution after 105 minutes. It was observed that the intensity of the induced pain was lower when standing on the soft surface. After the injection, amplitude, angular distance and CoP disolacement showed a tendency to be greater.

It was also found that the experimentally induced pain influenced postural activity, underlining central interactions between proprioceptors and nociceptors. The results showed that a higher feeling of comfort when standing on soft surfaces. As well, postural activity was lower when standing on the soft surface, which was sufficient to prevent swelling of the lower leg.

What does the study point out? 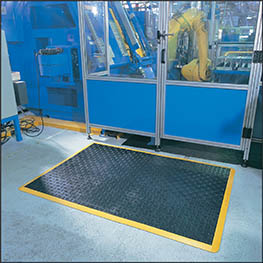 The Amco Rubber Diamond Comfort mat is a good example of a mat specifically designed for relief against tired feet, legs and back.

The pain, swelling and other discomfort that was observed from standing on hard surfaces is caused by work done while maintaining a fixed erect posture. This was exacerbated by the hard floor where the worker stood. This work posture has been shown to play a role in the development of lower back pain, as well as disorders of the extremities. The study also noted that the impact of these disorders on workers compensation insurance, absenteeism, loss of productivity and reduced well being was substantial.

While the handling of heavy loads is an important factor in the development of MSD (musculoskeletal disorders) as one can understand from a biomechanical point of view. It is a paradox that repetitive manual work with low loads also plays an important role in the development of MSD. But, this study has shown that repetitive manual work done on a hard surface can cause problems in the workplace and affects the health of those concerned. And, in this day and age with OH&S and worker’s compensation claims are always there to contend with, it’s a case of effort spent on prevention paying dividends in better workplace safety and improver worker’s health and well being. Not to mention, the positive effect on the bottom line.

For a copy of the study, click here: EurJAppl.

For more infomation on alleviating the stress ofrepetitive manual work with low loads, while working on hard surfaces, contact us now.