At AMCO, we pride ourselves of the quality of our anti fatigue kitchen mats. In the anti fatigue mat offering, Orthomaster is hard to beat. And, it is a mat that is used in many applications, including food preparation and hospitality. In August 2016, Ben, Executive Chef at Halcyon House, a boutique hotel located in northeastern NSW, sent in an enquiry in about our Orthomaster Mat for kitchen use: “I am interested to see how this mat looks and feels, it could be a good replacement for the mats we are using currently.”

They had purchased a cheaper style of matting for their Commercial Kitchen, a carpet style of matting which we refer to as our ‘Polyrib Entrance Matting’ but they just weren’t lasting, therefore after a product with a longer lifespan and better quality. This was definitely a good reason to recommend Orthomaster.

Ben preferred solid anti fatigue kitchen mats over a mat with holes, “I don’t like to use the mats that have holes in them as it feels like things will always go down the holes and be messy.” 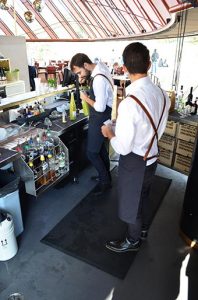 They trialled the Orthomaster Mat and were really happy with it, the smoother surface made it easier to clean and definitely had great anti-fatigue properties – they wanted more. Ben mentioned “The mats we have (that are definitely an inferior product) cost about $*** for a 1500 mm x 900 mm, we are happy to go a bit more and I can see the value in your product, but it’s a bit more than we were expecting to pay therefore were going to return the trial mat.”

I asked for some photos to be sent through on their current matting and optioned some different styles of anti fatigue kitchen mats but nothing compared to the Orthomaster anti fatigue mat. Ben said “We would prefer to use the Orthomaster Mat, but to fill that same we are constrained by our budget. But, I suppose, we would rather spend a little more to get the product we prefer.”

And, it was pretty much where we left the discussion.

Sometime later we spoke with Ben and they had decided that they would like to go ahead and purchase the trial mat onsite. In regards to the additional mats required, they decided not to move on them for the moment. I explained the Orthomaster anti fatigue kitchen Mats have a 3-year manufacturing warranty, and has great benefits. If your replacing your mats every year the price works out to be the same, but it just wasn’t in their budget.

Six weeks later (in October 2016) Ben sent through an email “I would like to organise a proposal for Orthomaster anti fatigue kitchen mats. We have been discussing it and would like to proceed in purchasing the product”.

Sometimes, we seriously have to look at the value, not as an initial outlay only, but on the true life value of the product. As mentioned earlier, if a mat has to be replaced yearly and another mat (Orthomaster) outlasted three fold, one should really look at the yearly value to compare apples and apples.

If you find you’re in the same situation as Ben, please contact us now.