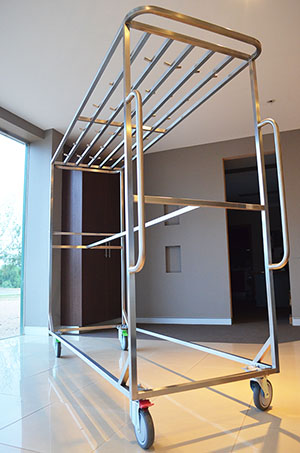 Our mat trolley allows you to hang mats to dry, as well as move them around your site. A great help when hosing down or sanitising factory floors.

The obvious cause is not always the real cause. In fact, sometimes, it is way off track. Recently in February 2018, at a leading food manufacturer’s factory floor, they were getting positive bacterial swabs from off the back of the rubber anti fatigue mats used on site. Imagine just how concerned they were with a potential health issue. So, the obvious thing was to blame the mat. We got involved when they were looking for another type of mat that would not allow positive swab tests from the underside of the mat.

The swab tests were testing positive and of course the easiest way out was to blame something, and just how the blamed product was was the actual cause was still to be proven.

We decided to go to the plant,  to establish whether the floor was putting the positive test results on the back of mat or vice versa. This became quite an involved procedure of testing.

With a good number of test results in, it was revealed that the sanitising fluid being used in the processing floor only worked for a maximum of two  hours. This was an important concern to us because after the 2 hours lapsed, the sanitising fluid was no longer effective. However, we also noted that the room temperature and humidity was still high in the factory and somehow the bacteria were obviously not fully under control or completely killed off by the santising treatment.

So, where to now?

So we looked at various options:

Finally, it is was pointed out that with treatment, the entire floor was being sanitised, except for the sections that were under the mats. As these covered the concerned areas this was point that needed rectification as the concrete floor under the mats and the underside of the mat we not being sanitised. Hence, the positive swabs were being transferred from the factory floor onto the underside of the mats concerned.

The onsite visit and questions gave the factory staff and Amco a  new direction as to how to solve the problem being experienced on the factory floor.

The company then chose to do the following:

The plan developed together was to wash the mats in a sanitising fluid, then hang the mats on the trolley overnight while the complete floor received its treatment as well. This is a pilot project now in action for one section of the plant to see just how this will work. 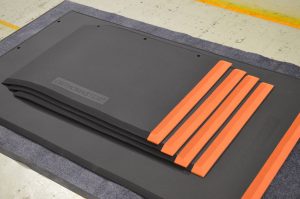 Orthomaster anti fatigue mats used in this case study have been colour-coded to prevent moving to different areas and cross-contamination. The holes punched in them suit the hanging points on the Amco mat trolley.

This project will be monitored for positive tests on the mats and the concrete floor along with sanitising procedures etc. If the pilot project receives good results then each additional area of the plant will be set up with stainless steel mat trolleys along with the colour-coded antimicrobial treated orthomaster mats.

Watch this space for further updates on this project.