A leading edge facility doesn’t only rely on top-notch technology, but also on top-of-the-line material when it comes to worker safety and comfort. In this article, we look at a distribution centre for a leading retail company, Woolworths, which breaks new ground, while also relying on proven products like our Orthomaster anti-fatigue mats.

Today’s retail market, especially for grocery lines, is extremely competitive. And, when one considers the usually small margins involved, getting a competitive edge is crucial. One of the two larger retail giants, Woolworths, began the progressive opening of its state-of-the-art, $215 million fully-automated distribution centre in late 2018. According to businessinsider.com .au, the Dandenong, VIC, facility “promises to deliver a step-change in cost savings and productivity” when it is fully functional and live later this year (2019).

Business Insider further notes: “Woolworths has yet to release details about the distribution centre, which is the largest in Australia and features the nation’s largest solar installation and more than 14 kilometres of conveyors.

“However, analysts have started crunching the numbers and believe the facility could save Woolworths at least $45 million in annual operating costs, increasing pressure on rivals Coles, Aldi and Metcash’s IGA retailers.” The facility is owned by property developers and managers, Charter Hall, and is leased by Woolworths for a period of 20 years.

About Woolworths and Charter Hall

The Woolworths company (ASX:WOW) referred to in this article is Woolworths Group Limited. A major Australian company, affectionally referred to as “Woolies”, the company has extensive retail interest throughout Australia and New Zealand. Interestingly, it is the second largest company in Australia by revenue, after Perth-based retail-focused conglomerate Wesfarmers. Because of its many interests, the Woolworths Group is the largest takeaway liquor retailer in Australia, the largest hotel and gaming poker machine operator in Australia, and was the 19th largest retailer in the world in 2008.

A section of Woolworths’ distribution centre, showing an impressive array of conveyor systems. Our mats are located at the GTP stations.

And, the Charter Hall Group (ASX:CHC) is one of Australia’s leading fully-integrated property groups, with over $26.4 billion of quality, long-leased properties across various sectors, including office, retail, industrial and social infrastructure.

With offices in Sydney, Melbourne, Brisbane, Adelaide and Perth, CHC oversees a portfolio of 768 properties that covers more than 5.4 million square metres in size. The company also claims to have $3.7 billion of development in the pipeline.

Sill in the staged process of opening, the Centre is the largest in Australia and features the nation’s largest solar installation, as well as more than 14 kilometres of conveyors. Situated on a 15.9-hectare site, 35 kilometres south-east of the Melbourne CBD. It will stock more products than Woolworths’ Brisbane and Sydney distribution centres combined and will supply most of Woolworths’ stores in Victoria.

The Dandenong facility combines technologies used in the traditional logistics industry and those in manufacturing and postal systems, including multi-storey racking systems, robotics and high-speed conveyor and sorting systems. These systems will sort and distribute stock faster and with much greater accuracy than traditional warehouse technology. The facility is expected to operate 24 hours a day, seven days a week, and will have the ability to pick cartons off shelves and load them onto trucks and pallets in the right sequence to meet the specific needs of stores.

Woolworths’ distribution design centre management noted that due to the scale and complexity of the new systems Woolworths might need to test the facility for 18 months before it goes fully live. Management also noted that “it is the largest single investment in infrastructure in Woolworths’ history and it is expected to deliver significant safety, efficiency and productivity.”

Whilst we can wonder at the physical and technological wonders of the facility, we cannot go past the human equation. Yes, the arms, legs and brains that run and work the centre. Hence, in this blog article, we focus on the human angle, especially on OH&S issues like worker health in regards to fatigue from standing on hard surfaces for extended periods.

One of the OH&S issues recently looked at by the Dandenong facility management is the use of Australian orthopaedic Ortho mats to reduce fatigue and prevent other health issues like those caused by standing for long periods on a hard surface. As a reader of this blog, you will appreciate by now that when it comes to working out what the benefits of anti-fatigue mats really are. We note that many facility managers are well-aware that anti-fatigue mats can be used to not only prevent accidents such as slips and falls from occurring, but also to reduce stress and pain in lower limbs, reduce or prevent lower back pain, joint and soft tissue damage and so on. As well, they are aware that workers affected are not concentrating 100% on given tasks, which in turn increases the risk of safety to individuals concerned and their co-workers. 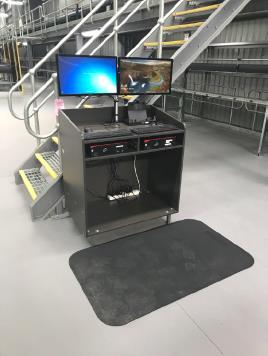 On one of his calls to product users early last year, a Woolworths abattoir, a suggestion was made to look into the new DC centre about to begin operation pilot testing in a few months, on the way to full operation in 2019. One of our product specialists, Dan Small visited the site to go over all the areas that they (Woolworths) were going to use Ortho mats. On his initial call, Dan brought a variety of mats for the DC manager to look at.

After explaining the different features and benefits of the different mats, the DC manager went for our Orthomaster #1 so Dan left a free sample for the users to try out.

He also wanted to ensure that the mat would sit well on the floor and not slide around – as areas designated for operators that required anti-fatigue mats had varied floor surfaces: steel chequerplate, laminated timber particle board and polished concrete. Testing of the mat was in some cases simulated use and in some actual use in warehousing operations. Features to be tested included operator comfort and anti-fatigue properties, durability and wear resistance as well as slip.

After a two week test run, operators liked the mat and it was providing the comfort they needed without sliding around. The initial apprehension about slip or movement was not realised.

Woolworths put through an order for a variety of custom made Orthomaster #1 mats for 13 locations around the centre, with some locations having a multiple number of mats for different sections. Based on that order, we manufactured various custom sizes including trapezium shapes, L shapes and some long rectangles.

The trapezium shape had a special application on a moving platform. The mat had to cover the trapezium-shaped platform (on chequerplate) which moved up and down to allow for an operator’s height, to allow access to goods being packed and the conveyor involved.

The critical areas were goods to person (GTP) stations, where an operator had to handle goods, which robots were unable to handle. After the operator handled a box it was then placed onto a conveyor, something normally done by a robot. Examples of this kind of work involves packing or unpacking of unusually shaped goods (referred to as ugly freight) which do not normally come in a boxes, e.g., brooms, fishing rods, etc. These are the areas where employees are most likely to end up with sore feet from the cold hard concrete, especially without the use of anti fatigue matting. As well, stations where defoiling (removal of shrink wrapped goods) and salvage work is involved.

Just a final quick note on the Orthomaster anti-fatigue mat. This mat has been designed for heavy industrial use. Among other things, the mat conforms to the gamut of Workplace Manual Handling issues and has less than half the weight of all other rubber mats of the same size.

While the orthopaedic anti fatigue mat reduces impaired circulation & muscle fatigue, this also helps reduce any tendency to arthritic pain from prolonged standing on all hard surfaces, including concrete floors, metal floors
and so on. And, for use in industrial applications, we note that the mat is bevelled on all sides for ease of trolley access, avoiding the possibility of slipping when trolleys go over the safety mat. 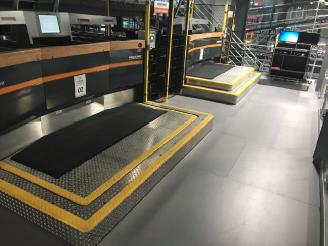 Orthomaster is in arguably the best anti-fatigue mat around. In fact, the health industry version of this mat is backed by a TGA Certificate and Class 1 Medical Award endorsing entry into Operating Theatres, Central Sterilising areas & Major Hospitals around Australia. This is an great endorsement of the quality and durability of Orthomaster. After all, we give a six year warranty on product and workmanship for all our Orthomaster mats, sometime called Ortho Mats for short

Contact us NOW  for more details on Orthomaster or to discuss your Australian anti fatigue matting needs.