A recent order from a mining company for more U-Tred anti slip stair treads / stair nosings got me thinking. Where were these U-Treds going to be used, I wondered? I checked with the customer and was not surprised to find out that they were used in a coal preparation plant as a replacement for bull nosings

A coal preparation plant (CPP) — also called a coal handling and preparation plant (CHPP), coal handling plant, prep plant, tipple or wash plant is a facility that washes and separates coal from soil and rock. The plant crushes these into graded-sized chunks, stockpiles, grades and prepared it for transport to market. These facilities also tend to take responsibility for loading coal into rail cars, barges, or ships.

And, in Australia, coal is a big export earner. Primarily in Queensland, New South Wales and Victoria. So, as you can imagine we have quite a number of CHPPs using Non Slip Stair Treads in the coal mining facilities in these states and others.

Back to coal plants. We note that the more of this waste material that can be removed from coal, the lower its total ash content, the greater its market value. And, consequently, the lower its transportation costs, because of the smaller volume/weight. Hence, we see the importance of coal prep plants in this industry.

And the common factor of coal prep plants is the use of water to wash coal. Wet areas are commonly found around the plant where non slip stair treads are needed.

Now, let’s look into non slip stair nosings. Traditionally, conventional anti slip stair nosings and bull nosings that have been used are made from a variety of metal including Aluminium, Stainless Steel, and Galvanized steel – as these been the only products available to install anti slip on the edge of wet steps. 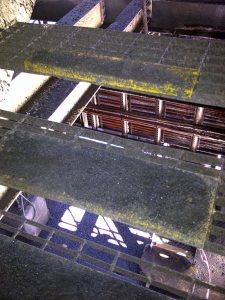 So, let us consider some fact’s that work against using conventional stair nosings:

– Should you find that the step’s grating is bent in any way, this will give cause to uneven pressure on the stair nosing when being fastened down. Uneven stress and pressure causes a rapid onset of delamination to occur.

This, in turn, gives way to the resins and anti-slip grit or other material to come off. This results in a bare piece of flat slippery metal on the nosing. This would then transform the whole stairway into a very dangerous work area.

– Conventional anti-slip stair nosings are also an excellent resting place for any coal spillage because of their flat construction. The coal itself will blacken or discolour the yellow safety colour along, rendering the colour useless for safety use. As well, the actual step becomes very uneven from the coal spillage which also promotes an Increased Potential Risk of users rolling on their ankle/s which puts more injuries on the safety office’s “days without injuries” whiteboard. Sadly, some people find it difficult to embrace change and persist in the above manner.

Happily, there is a solution to the above situations. One just needs to consider AMCO’s U-Tred technology and keep a step ahead. No need to have extra anxiety over safety needs at work:
– slipping on slippery steps
– rolling on the ankles from spilt coal lying on top
– missing the step entirely due to discolouration of what was originally yellow to help guide your feet to the next step. 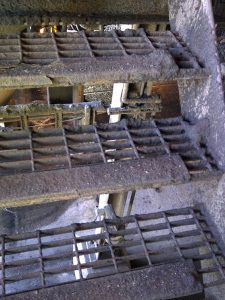 When conventional anti slip stair nosings fail, they are no longer of any use in anti-slip and may even cause injury.

steel anti slip stair nosings, aluminium stairnosings, fibreglass stairnosings and bull nosings used in CHPP can be more of a curse than a cure. This is not only for the above reasons, but the problem of installation which is not only more time consuming, but which in the end may cause more problems than originally thought of.

Consider fibreglass stairnosings. When holes are drilled and the stairnosings are screwed down and bolted, the tendency is for cracks to develop in the bolted area. And, the crack tends to spread with the pressure of steps over the anti slip stair nosings. (These can also fastened down with Wafer Teks screws which again tend to crack fibreglass stairnosings when undue torque is used.) Thus, the original intention of providing a sturdy safety product is negated when these eventually break down.

When traditional safety yellow anti slip stair nosings (made of gal steel) are installed, these easily get covered with muck, whereby they no longer serve the purpose as they are no longer visible and they have the abrasive anti-slip material covered and filled with debri and dirt, thereby rendering them ineffective.

Also, as these normally are made of galvanised steel, they tend to corrode from the edge in, see photo, which means removal and replacement. Let’s not forget that traditional anti slip stair nosings also are more expensive and difficult to install.

With U-Tred stair nosings, we’re talking a matter of seconds compared to 5 – 6 minutes each of labour time to install one traditional nosing on one steel grate step. 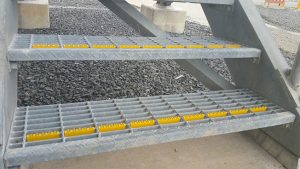 It’s important to note that UTred can restore grip back to a worn step edge. This helps extend the life of stairs and worn steps, as well as save the cost of step removal/replacement of the old steps, as U-Treds are easily installed over these step edges, with little fuss.

We’ve also supplied U-Treds to extend the life of corroded steps. While this will work, we note that we suggest this only as a stop-gap measure for a few years to extend the current life of your infrastructure and push capital costs back to when they may be more affordable. The stairnosing will only be as good as what it’s adhered to. Hence, if corrosion is very advanced, the step may just give way.

We have a number of testimonials for our U-Tred anti-slip stair nosings in different industries, but including mining and coal prep plants.

For more information, or to discuss your particular needs, please contact us now.