Let’s face it every industry, or even industry sector, has it particular jargon or even special buzzwords. Our industry is no exception. Let me take the opportunity of this blog to clarify some bull nosing and stair cappings terms in one sector of our industry.

There are a few other terms used to describe exterior anti-slip stair nosing, some of which are not too common. These word descriptions are “Stair Capping” and “Bull Nosing”. Funnily enough I spoke with two people on different occasions where I came across these two particular terms. 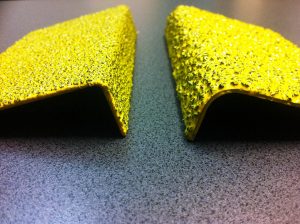 Now let’s take another industry. When it comes to architects that are approached to do up some engineering drawings for a proposed new upgrade of plant or infrastructure then the most likely term used is anti slip ladder caps. Before I confuse you any further, let’s get the explaining the difference.

External Anti Slip Ladder Caps are mostly the shape of various size ladder rungs whether they have square or round profiles. The round profiles have a common name amongst high users called “half rounds“. In effect this is what they are. But, who in the heck would really know what a half round is on a public street? 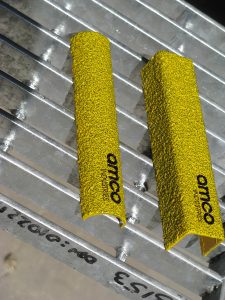 All sorts of names for the same effect in the long run, I suppose. Exterior Anti slip Ladder caps wouldn’t  necessarily need all the accessories for installing on steps and as most of the time industry would always install ladder caps with a type of adhesive. BTW, We would always recommend Sika flex 291.

But, I digress, so here’s what you should consider.

Traditionally, anti slip bull nosings are fitted onto step treads made of concrete, open type grid, chequer plate etc. Typically, they do not have a right angle at the front leading edge of the step. The have a Bull Nosing radius not a sharp 90 degrees angle as seen in most anti slip stair nosings used in mining, marine and heavy industrial areas.

Why do customers choose this style of anti slip bull nosing?  Quite often you hear of bull nosings being used on old concrete steps that have degraded over the years and typically there is no support out the front of the edge of the step as the concrete has crumbled away.

Using the bull nosing for this type of install or fixing makes it a lot easier as less adhesive is used in gluing the corner bull nosing to the edge and gives a softer appeal. Also, it is has been quite commonly used on chequer plate steps over the years. We note that use of anti slip with a bull nosing radius seems to be less common and on the way out today. 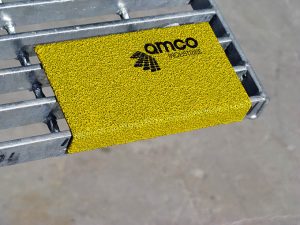 Stair Cappings are the very same thing as anti-slip stair nosings. The term is more commonly used as industrial-type jargon for use in the outside elements such as around marine and mining exterior steps and also stairs used in heavy industry. The term stair cappings is used very little when communicating with industries associated inside office-type or in the corporate environment. So, Stair Capping for mining and other industrial sites it is, as we said, this can be very confusing.

For more clarification on industry jargon, or to discuss your anti slip nosing/capping for stairs, contact us now. 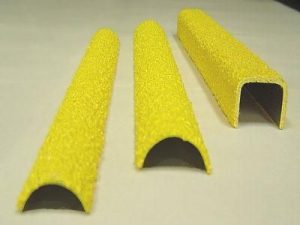